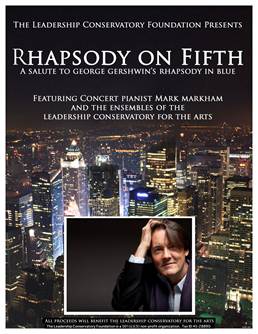 Coming up this Saturday night is a unique Palladium concert. It’s an evening of classics and jazz, featuring George  Gershwin’s Rhapsody in Blue, performed by world renowned pianist Mark Markham and the nationally recognized Tarpon Springs Leadership Conservatory for the Arts jazz and wind ensembles.

Last week, I spoke with Mark Markham about the show and his distinguished concert career:

PalladiumPaul: When did you start playing the piano?

Markham:  I began piano lessons at the age of 8. However, when I was 4 years old, I was given an electric organ – a Magnus Chord organ, to be precise. It had 22 keys and buttons for the chords. I would improvise, give little concerts and basically taught myself how to play. It was a wonderfully creative experience.

PalladiumPaul: What type of music do you typically play and what’s your favorite?

Markham: I am a classically trained pianist with a bachelor’s, master’s and doctorate degree in piano performance. Since I always improvised at the piano, I am also very comfortable in jazz. My favorite music is good music. I like all kinds, as long as it is good.

PalladiumPaul: Where have you played and what’s your favorite venue?

Markham: I have had the extraordinary opportunity to perform all over the world in about 30 different countries.  The most famous place to play is Carnegie Hall, where I’ve had the privilege to play on several occasions. I’ve performed all throughout Europe, Asia, South America and the Middle East. Some concerts were in ancient temples, as in Lebanon, or in an ancient amphitheater in Greece, built in 2500 BC, that seats 14,000 people outside. No amplification was needed, as the Greeks understood acoustics!! Perhaps one of the most memorable performances was for the presentation of the Nobel Peace Prize to President Jimmy Carter in 2002.

Markham:  I have many favorite composers and could not imagine choosing just one. But, when I am playing a piece, that composer is my favorite at that moment!

PalladiumPaul: Why are you doing the concert at The Palladium?

Markham: The students at the Tarpon Springs Leadership Conservatory are some of the most gifted and dedicated young musicians in the state of Florida. Their accomplishments are recognized nationally and this concert is to help raise money for their participation in the Macy’s Thanksgiving Day Parade in November. As a native Floridian I wanted to help out and it makes it even more fun that my niece Sheridan plays the flute in the band.

PalladiumPaul: What advice would you give to a young musician like the ones you’ll be playing with on April 20?

Markham: The most important thing in this life, to me, is to care about something – to be passionate about doing something. If playing an instrument in a band, or being part of the guard that performs with them in these performances helps a young person to feel that they are contributing something positive to this world, that’s an incredibly powerful life lesson to carry with them. They don’t all have to be professional musicians, that’s not what it’s about. It’s about really connecting to something, and if music happens to be the vehicle that carries them to this place, then how lucky are we, as the public, to see happy young people making music and moving audiences. It’s not the hearing of the music that’s so moving. It’s the knowing and sensing that these students care about doing something really well. So, my advice to these kids: PLAY YOUR HEARTS OUT!

Rhapsody on Fifth is this Saturday, 4-20 at the Palladium. For tickets and information visit www.mypalladium.org or call the box office at 727 822-3590.