An Evening with David Amram

“David Amram is the Renaissance Man of American Music.” –The Boston Globe

Multi-instrumentalist David Amram will appear with Mark Feinman, drums, Alejandro Arenas, bass, and Jack Wilkins, sax. Actor Jim Sorensen will also present readings from Kerouac, while Amram and the band improvises behind him.

Musician, composer, and beat generation icon David Amram appears with band and actors reading Kerouac in the Side Door.

David Amram started his professional life in music as a French Hornist in the National Symphony Orchestra (Washington, D.C.) in 1951. After serving in the US Army from 1952-54, he moved to New York City in 1955 and played French horn in the legendary jazz bands of Charles Mingus, Dizzy Gillespie, Lionel Hampton and Oscar Pettiford.

In 1957, he created and performed in the first ever Jazz/Poetry readings in New York City with novelist Jack Kerouac, a close friend with whom Amram collaborated artistically for over 12 years. 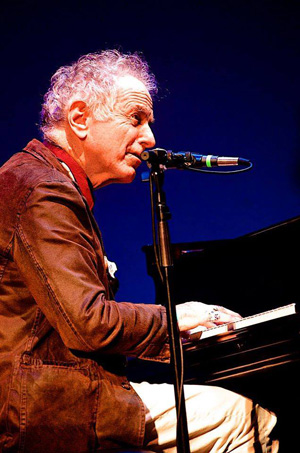 Since the early 1950s, he has traveled the world extensively, working as a musician and a conductor in over thirty-five countries including Cuba, Kenya, Egypt, Pakistan, Israel, Latvia and China. He also regularly crisscrosses the United States and Canada.

He composed the scores for many films including Pull My Daisy (1959), Splendor In The Grass (1960) and The Manchurian Candidate (1962). He composed the scores for Joseph Papp’s Shakespeare In The Park from 1956-1967 and premiered his comic opera 12th Night with Papp’s libretto in 1968. He also wrote a second opera, The Final Ingredient, An Opera of the Holocaust, for ABC Television in 1965.

From 1964-66, Amram was the Composer and Music Director for the Lincoln Center Theatre and wrote the scores for Arthur Miller´s plays After The Fall (1964) and Incident at Vichy (1966).

Appointed by Leonard Bernstein as the first Composer In Residence for the New York Philharmonic in 1966, he is now one of the most performed and influential composers of our time.

READ MORE
His most popular recent symphonic compositions include This Land: Symphonic Variations On A Song By Woody Guthrie (2007), commissioned by the Guthrie Foundation and performed by the Colorado Symphony with Amram conducting and recorded by Newport Classics in 2015; Giants of the Night (2002) commissioned and premiered by flutist Sir James Galway; Kokopeli: A Symphony in Three Movements (1995), premiered by the Nashville Symphony Orchestra with Amram conducting; Three Songs: A Concerto for Piano and Orchestra (2009), Greenwich Village Portraits for Alto Saxophone and String Orchestra (2018) and Partners: A Double Concerto for Violin, Cello, and Orchestra (2018)

His archive of professional and personal papers were acquired by the Lincoln Center of the Performing Arts Branch of the New York Public Library. And, he was the subject of the prize-winning full-length feature documentary David Amram: The First Eighty Years, which is available on Vimeo On Demand.

Amram is the author of three memoirs, Upbeat: Nine Lives of a Musical Cat (2009), Offbeat: Collaborating With Kerouac (2005) and the highly acclaimed Vibrations (1968, 2007), all published by Routledge Taylor and Francis. His fourth book Amram@90: Notes from a Promising Young Composer will be published in November of 2022, celebrating his 92nd birthday.

Highlights of the past decade include the following awards.

In 2011, Amram was inducted into the Oklahoma Jazz Hall of Fame as the recipient of the The Jay McShann Lifetime Achievement Award.

In 2013, he was presented with Clearwater´s Pete and Toshi Seeger Annual Power of Song Award.

In 2014 he was selected with Rosie Perez as a recipient of the Harold Clurman Spirit Award “for courageous contribution to the culture of New York City and beyond.”

In 2015, Brooklyn College presented David Amram with his seventh Honorary Doctor of Fine Arts and chose him as their commencement speaker, in recognition of his enormous achievements and continuing contributions to the cultural life of New York City for 40 years of bringing the worlds of classical music, jazz, Latin, Native American and global Roots music together and available for all ages to enjoy. And the Theater For The New City honored him with their annual Love & Courage Award for his years of creating music for the theater, film and Spoken Word.

In 2016, he received several awards for his lifetime of work as a classical composer, improvising multi-instrumentalist and pioneer of World Music, while continuing to tour internationally while completing and premiering his Three Lost Loves for alto saxophone, violin and piano. And The New York Chamber Music Festival chose him as their composer in residence for their 2016-2017 season.

In 2017, he composed Partners: A Double Concerto for Violin, Cello, and Orchestra, was made a Lifetime Member of the Actors Studio, received the first annual Lifetime Achievement Award from Folk Music International, and was given a special award by Farm Aid for 30 years of annual musical collaborations with Willie Nelson and his band to help support America´s family farmers through music.

In 2018, he composed the score for Oscar-winning director Barbara Kopple´s new documentary feature film, New Homeland about Iraqi and Syrian refugees in Canada. In December of 2018, he attended the World Premiere of his latest symphonic work Partners: A Double Concerto for Violin and Orchestra in Ann Arbor Michigan. The National Orchestra of China presented the Asian premiere of his flute concerto Giants of the Night, composed for flutist Sir James Galway.

In 2019, he conducted his Elegy for Violin and Orchestra at Carnegie Hall, the New York Philharmonic´s brass quintet presented the NY Premiere of his Fanfare and Processional for Brass Quintet, and his latest chamber music composition Bulgarian Wedding for Violin and Horn was premiered and was presented in Europe on tour with three different performances in New York. He completed the string orchestra version of his Greenwich Village Portraits for saxophone and orchestra and began composing Global Suite for Winds, Brass, and Percussion for the Harvard Wind Orchestra, two new chamber works, as well as starting to write his fourth book Amram@90:Notes from a Promising Young Composer.

In the 2020-21 season, his 90th birthday will be celebrated with concerts and premieres of his works in NYC, Boston, Chicago, San Francisco, Los Angeles, and cities across the country and overseas.

In addition to writing new music, he continues to perform around the world as a guest conductor, soloist, multi-instrumentalist, bandleader at jazz, folk, and classical festivals and narrates them in five languages.

TICKETS
Reserved: $50 – select seats from the map.
General Admission: $25 in advance, $30 day of show.
Please note only certain tables have reserved seats. Most tables are GA seating as noted on the map.